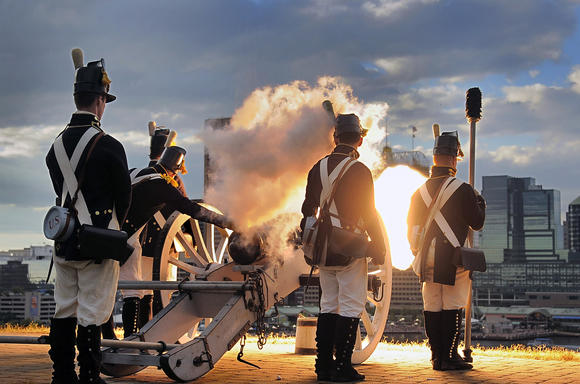 The Corps of Artillery at Fort McHenry are illuminated as they fire a Napoleonic six-pound field piece as members of Fort McHenry usher in Defenders Day celebration on Federal Hill to start the weekend Friday, Sep 13, 2013. (Karl Merton Ferron /
Baltimore Sun / September 13, 2013)

By Carrie Wells, The Baltimore Sun

The state of Maryland announced $1.2 million in new matching grants Monday to support events and projects commemorating the bicentennial of the War of 1812.

Fifteen Maryland non-profit and government entities will get the grants for projects or events, including $115,000 to the Creative Alliance for the Battle of Baltimore Festival and History Conference, $250,000 to the Maryland Academy of Sciences for the IMAX 3D film “Star-Spangled Banner: Anthem of Liberty,” and $128,000 to the Reginald F. Lewis Museum of Maryland African American History and Culture for the presentation “For Whom it Stands: The Flag and the American People.”

The events are intended to boost tourism and economic development. The grant program is funded through the state, corporate sponsorship and the sale of commemorative coins, according to the Maryland 1812 Commission.

The three year commemoration of the War of 1812 will end with the Star-Spangled Spectacular in September 2014, celebrating the 200th birthday of the National Anthem.

This entry was posted in AMERICAN NEWS AND EVENTS. Bookmark the permalink.