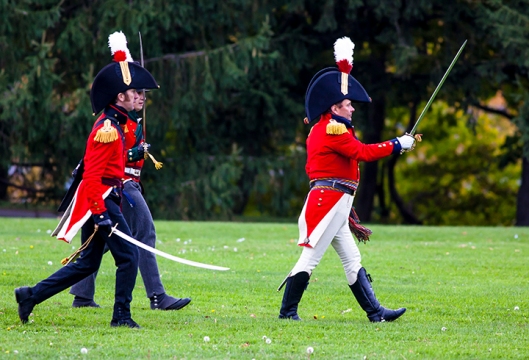 Sir Isaac Brock once again marched on the Heights of Queenston.  Well ok it’s actually Scott Finlay, but Brock was in Queenston this weekend watching over the events.

With rain forecast for Saturday it seemed it was going to be a wet battle.  Close to 1,000 re-enactors took part in the 200th anniversary of the Battle of Queenston Heights.

Along with the 1,000 re-enactors were approximately 15,000 spectators. Some from as far away as Victoria BC.

With canons blasting and guns firing the 90 minute re-enactment was a spectacular event.

Only light rain towards the end of the battle fell, as one re-enactor said it rained in 1812 so we needed a bit of rain today as well.

Before and after the battle were several ceremonies and speeches by dignitaries and public officials.

The day finished off with a fireworks display over Brock’s Monument.  It seemed that the fireworks display was going to be a very wet event. It started raining at about 5pm and was very heavy for a time.  The fireworks were scheduled to go off at 7:30pm and as though Brock himself wanted it to be a success the rain stopped at 7:25pm.

This entry was posted in CANADIAN NEWS AND EVENTS. Bookmark the permalink.